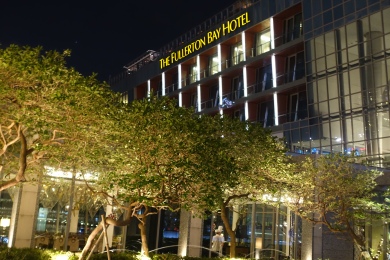 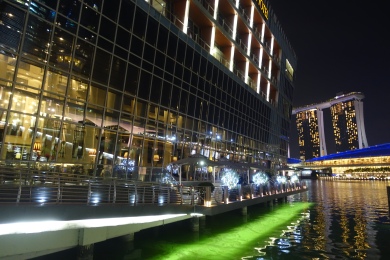 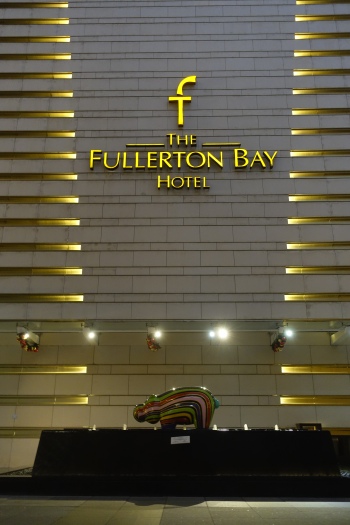 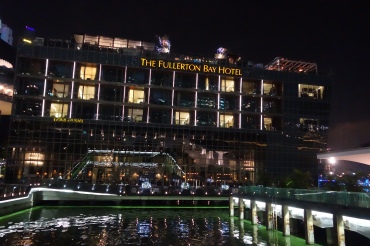 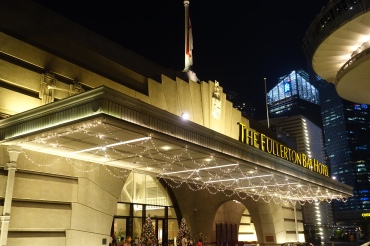 I love the design of the Fullerton Bay Hotel, an architectural delight to explore and enjoy, including the surrounds, especially the promenade. 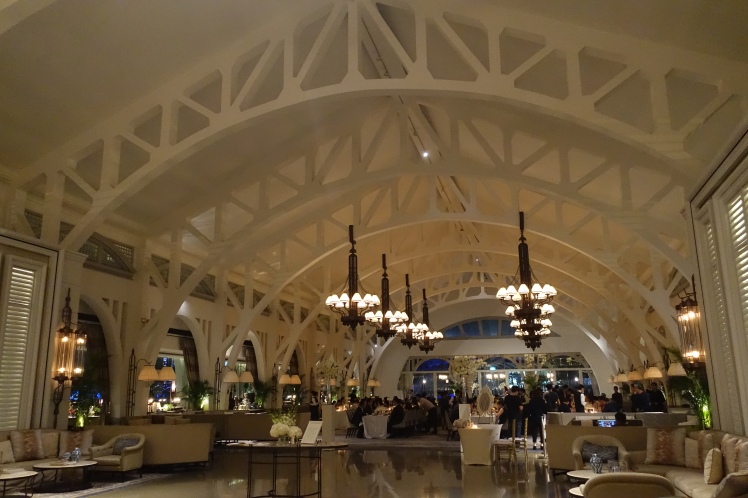 The hotel is part of the 1933 Art-Deco heritage Clifford Pier building – supported by beautiful arches – that evokes childhood memories of it as the departure point of my annual pilgrimage with my Mum to one of Singapore’s southern isles, Kusu Island, to worship at the Tua Pek Kong (大伯公) temple. The former pier was also the landing point of Singapore’s early immigrants, including my Dad from China, arriving by sea. 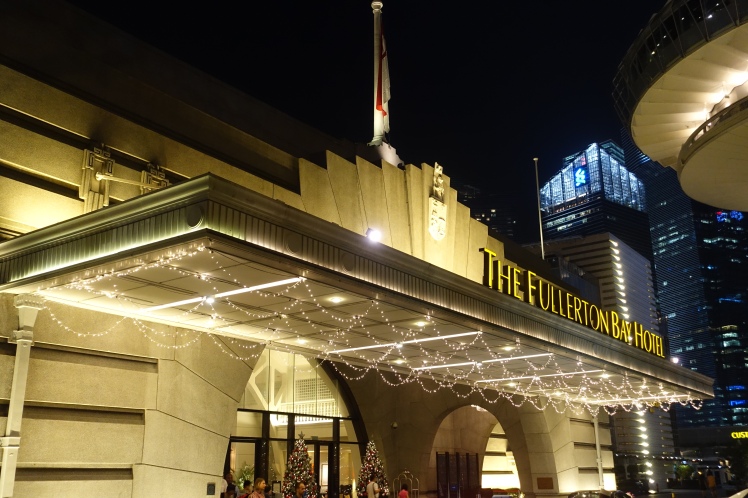 The hotel has won numerous awards, including the International Hotel Awards for Best Hotel Architecture (Asia Pacific), and was voted the 100 World’s Best Hotels & Amongst Top City Hotels in Asia by Travel + Leisure (USA). 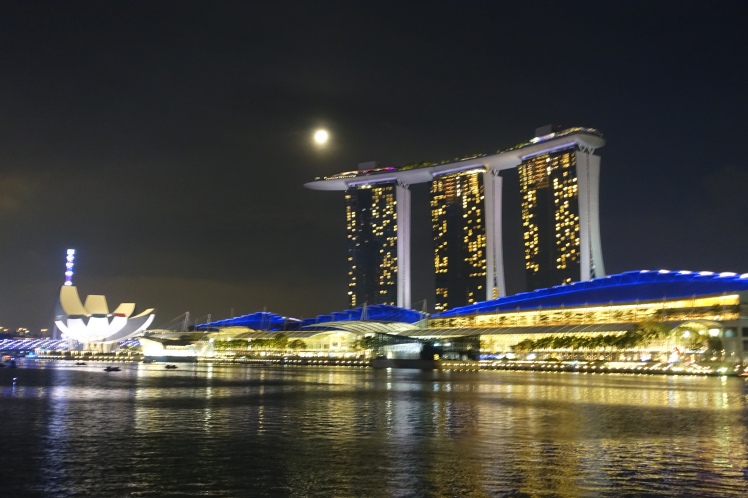 The hotel, with the financial district at its doorstep and located right at the waterfront, commands mesmerising views of the skyline featuring the iconic Marina Bay Sands Hotel. 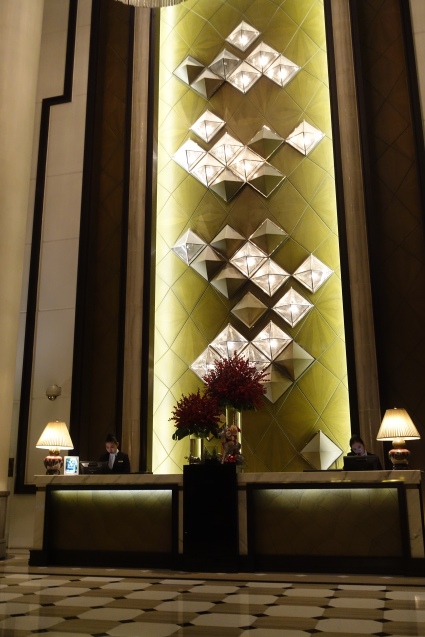 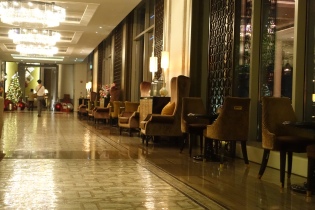 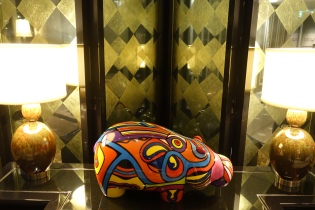 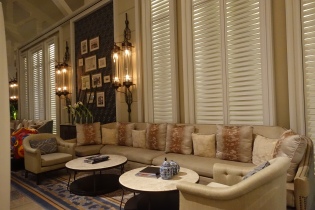 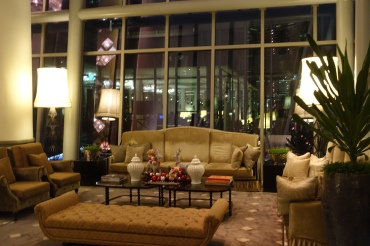 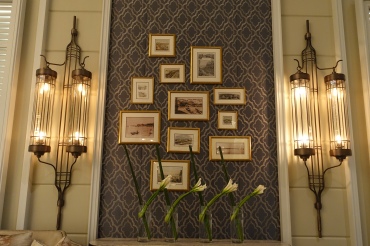 The Fullerton Bay Hotel features stunning architecture, aided by the natural beauty of the colonial building; its contemporary interior is filled with quirky sculptures; and ornaments are planted around every corner that offers tantalising glimpses of the city skyline and the Marin Bay front. 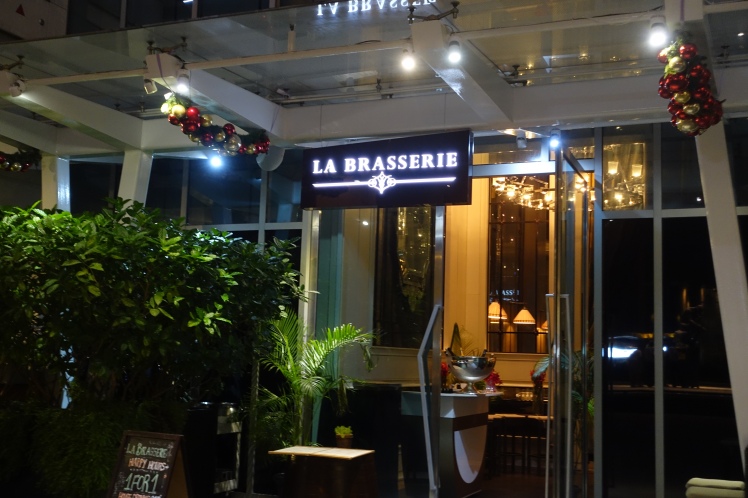 Tucked in a corner of the hotel is the La Brasserie French restaurant, renamed from The Clifford some months ago. I had a dinner at the The Clifford once but it didn’t leave me a strong impression. I was hoping Chef Nicolas Reynard, hailing from southern France, as the new man at the helm of the kitchen, would change that. 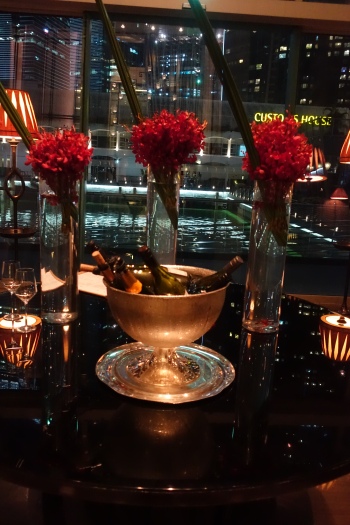 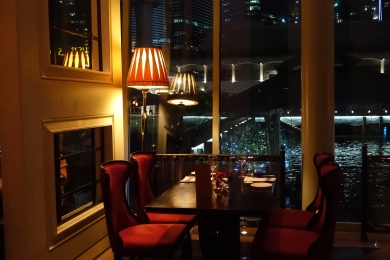 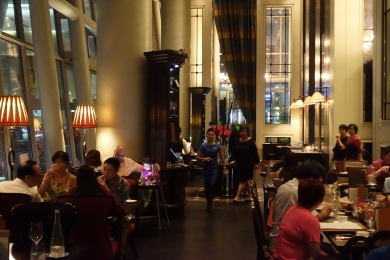 The  restaurant was busy on this Saturday evening. The interior is smart and casual, decorated  French brasserie style; and dimly-lit enough to double as a romantic dinner venue. 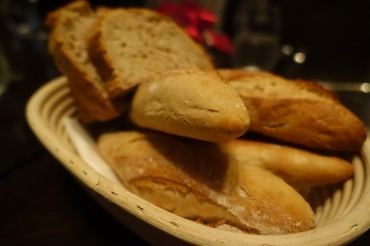 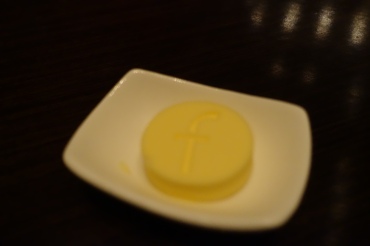 The menu, concise but populated with enough enticing dishes, dictates tough deliberations. We also like that the restaurant offers a flight of 3 tasting-portion wines, available in both red and white, at only $18. Our waitress told us erroneously that we can’t mix and match the red and white for a flight, but the situation was quickly corrected when we questioned the manager, who then obligingly let us share 2 flights of wine. The bread rolls, as befitting any worthy French restaurant, was fresh and warm; and the butter came inscribed with the hotel’s “f” emblem. 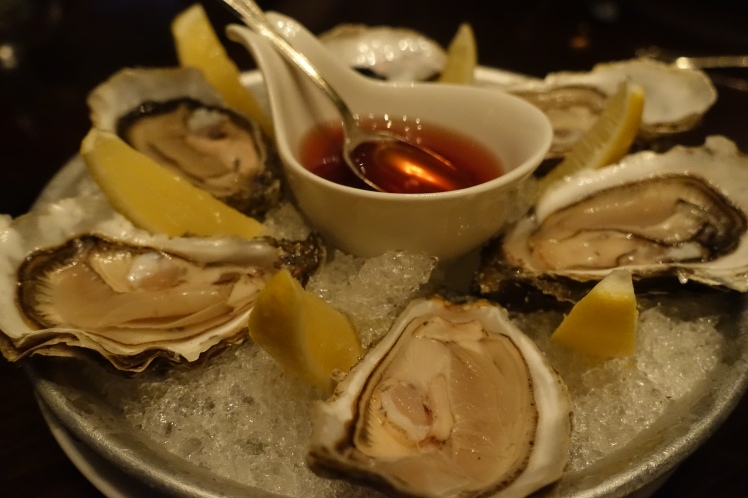 We started of with the half a dozen of Fresh Oysters; the brine from the sea was still discernable. 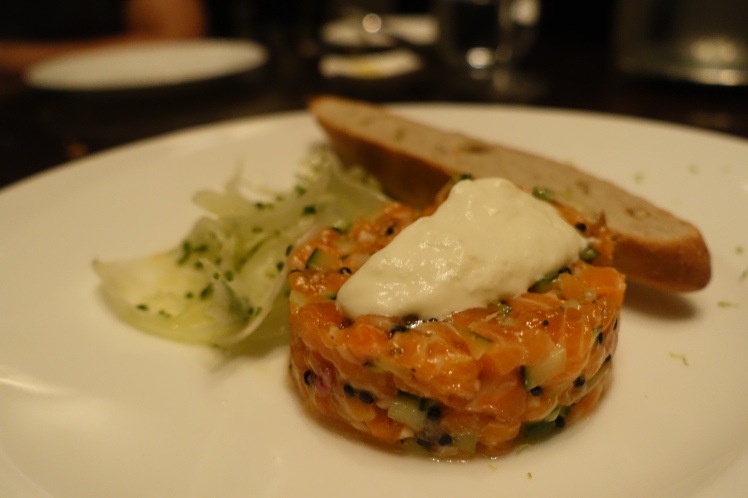 The Trout Tartare with avruga caviar was very well executed; fresh and delectable morsels of trout balanced by the citrus cream. 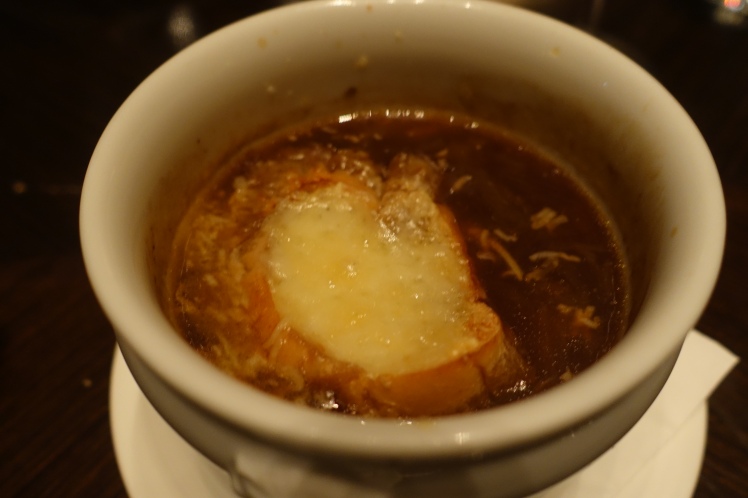 The restaurant was kind enough to split an order of the French Onion Soup, served piping hot with the sweetness of the onions coming through strongly. 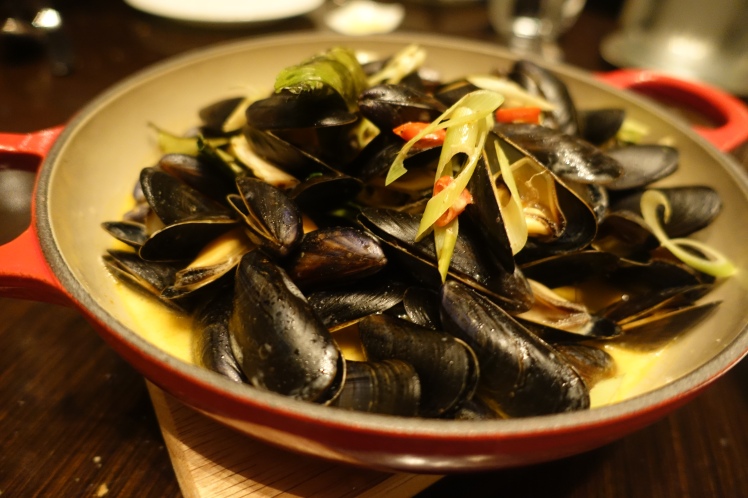 I’m always wary of ordering mussels in Singapore; fortunately the Mussels, from Normandy, turned out to be petite and very fresh; they were delicious with the piquant Thai lemongrass coriander coconut milk broth rendered sweat-breaking spicy by the chilli padi, and served with crunchy fries on the side. A tantalising dish. 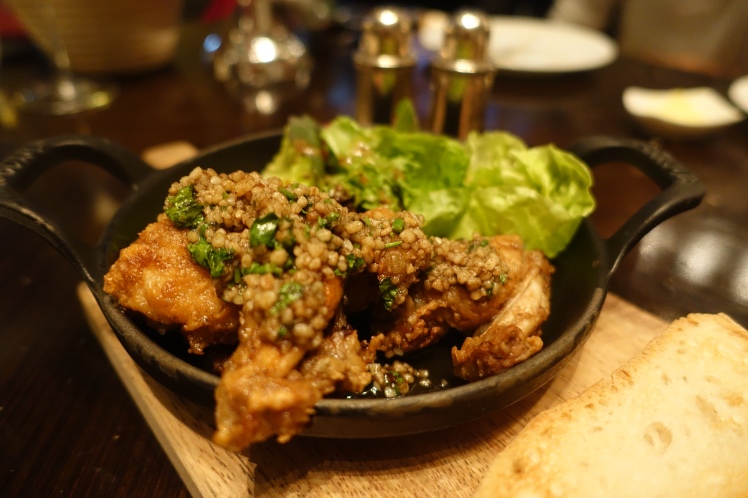 I was impressed by the final appetiser of Sautéed Frog Legs – lightly charred pieces of succulent meat in an aromatic parsley-infused garlic butter that’s loaded with heaps of garlic bits that will keep vampires miles away. 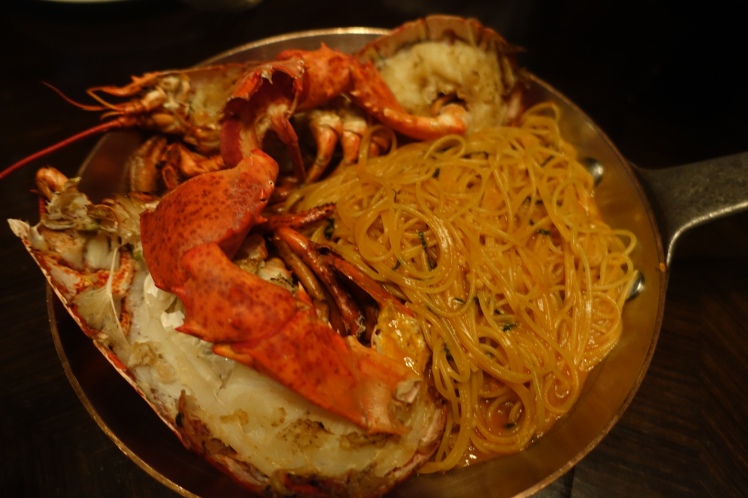 The Boston Lobster Capellini came with silky strands of al dente pasta smothered in a hearty lobster bisque sauce. The lobster was succulent and generously meaty. 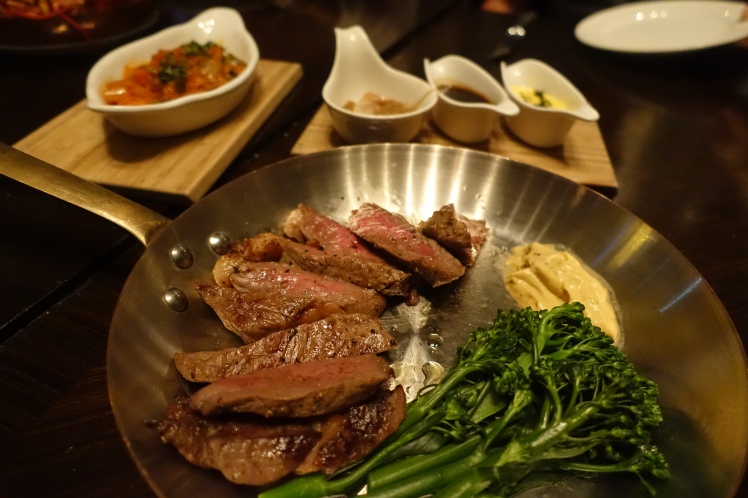 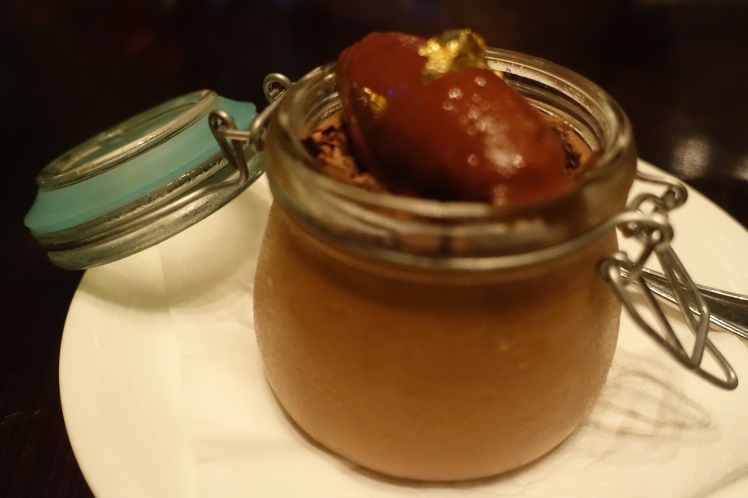 The dessert of Mousse Au Chocolate was Inaya Dark Chocolate 68%, nicely presented in a jar, and topped with a gold leaf – light, creamy and sinful, the way it should be. 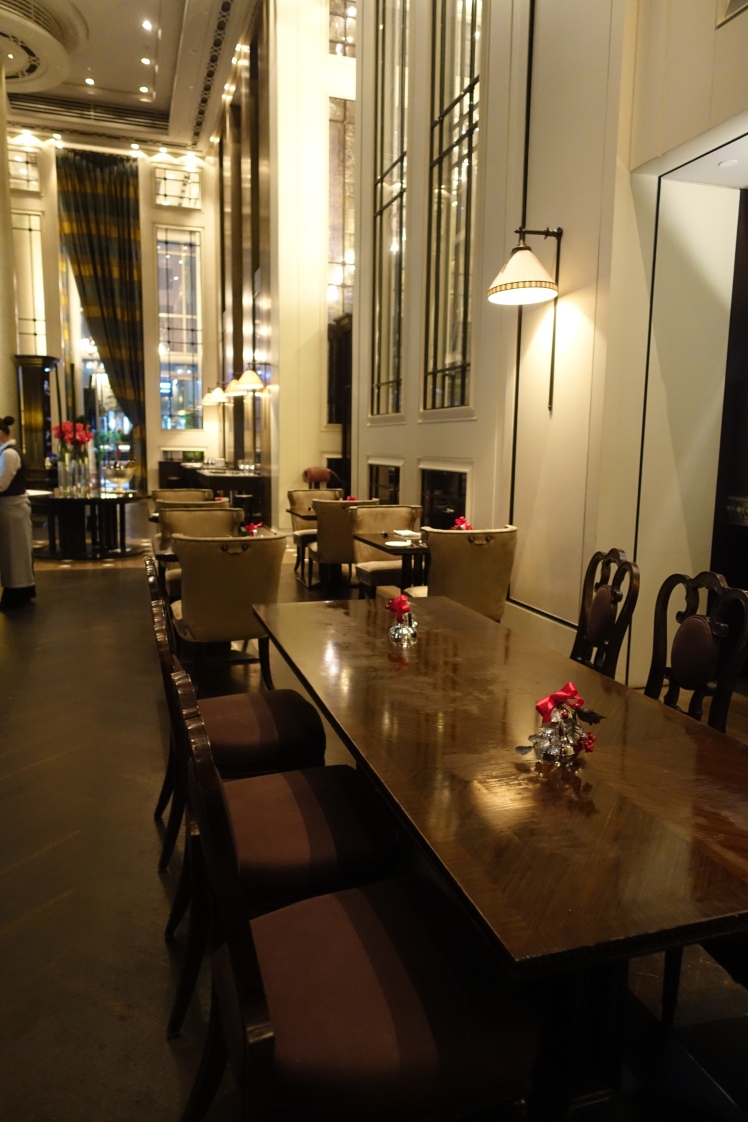 Martin Pandey, the assistant manager of the restaurant was very chatty and friendly, and gave several suggestions on food and things to do when I expressed my interest to visit Kathmandu. Service overall was earnest but still erratic, as our wine didn’t come despite prompting of our waitress. 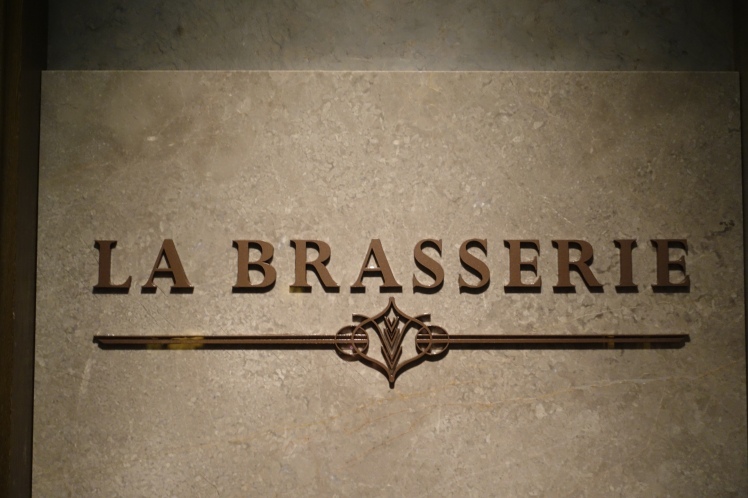 Prices are reasonable considering the very competent French cooking, fresh ingredients along with such a premium locale and stunning views; and particularly so with a 15% discount coming off a prevailing credit card promotion – the bill came in under S$300, with 2 flights of wine.

La Brasseries is a great place to drop by, unwind and enjoy a good meal after strolling the bay front promenade that stretches from the iconic water-sprouting Merlion to the hotel, while enjoying the spectacular night views; especially stunning when the light show from the Marina Bay Sands Hotel is running. I’m delighted that the change of The Clifford to La Brasserie is for the better.