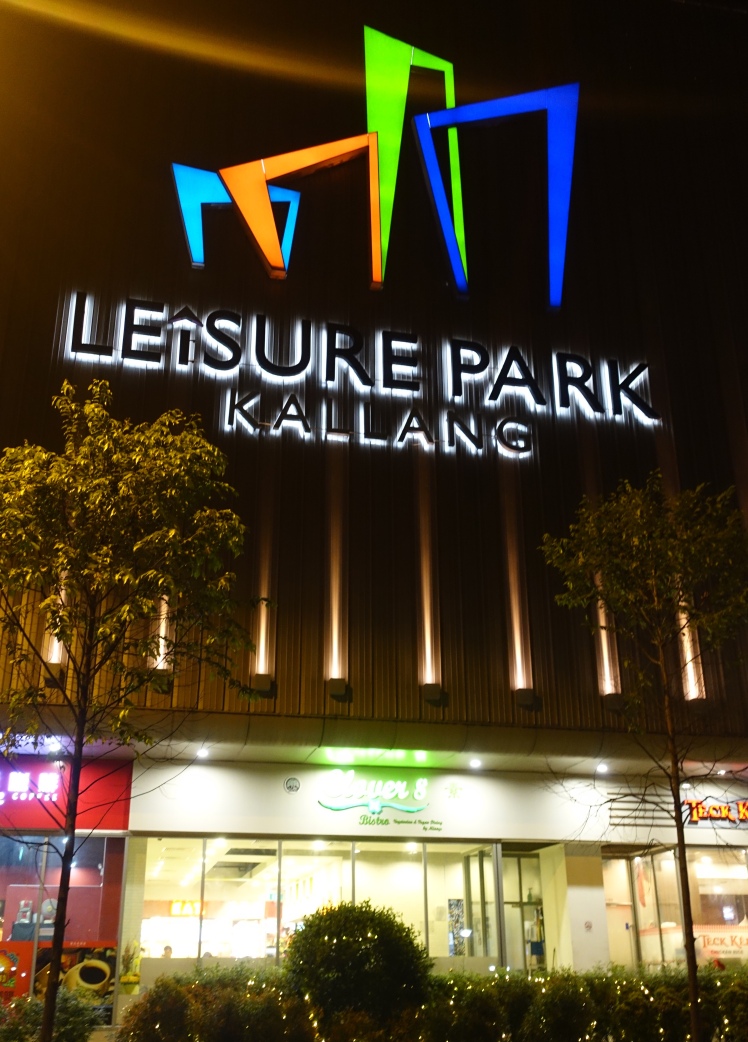 Dōngzhì Festival (冬至), or what westerners refer to as Winter Solstice Festival, falls on 22 December this year. It is the Chinese equivalent of Thanksgiving, and one of the most important festivals celebrated by the Chinese and other East Asians; a time for the family to get together and partake in the tradition of the making and eating of tang-yuan (湯圓) dumplings.  The festival began as a farmer’s festival to celebrate year-end harvest. Apparently this day has the longest night of the year for those living in the northern hemisphere -this is the day when the yin qualities of darkness and cold are at their most powerful, but also the time to celebrate its passing; the heralding of the arrival of  longer daylight and warmth of yang. For this occasion, we chose to dine at Joyden Treasures Restaurant at the revamped Leisure Park Kallang adjacent to the  Singapore Sports Hub. 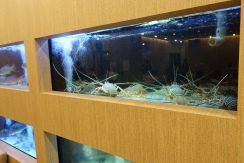 The decor is soothing but doesn’t excite –  shades of light and dark brown wood paneling and trimmings, beige upholstered-chairs in a brightly-lit spacious hall, with seafood tanks lining one wall. The tables are not large, and it was no mean feat to squeeze the dozen of us into one table. 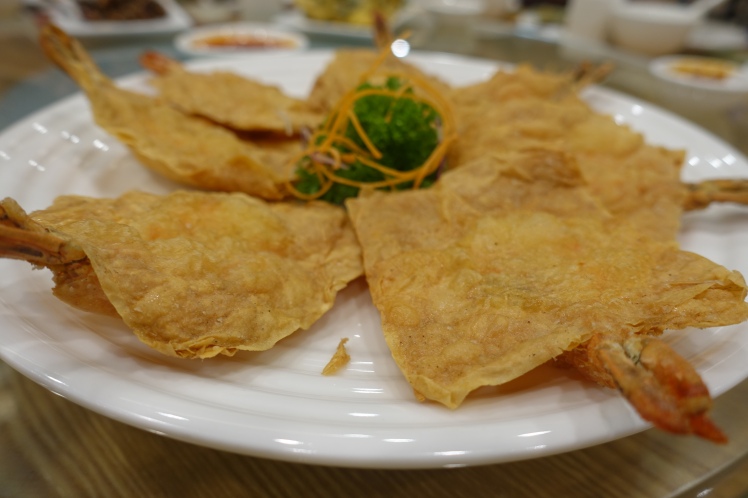 The menu is predominantly classic Cantonese dishes with a few modern interpretations. We opted to go with several small-plate appetisers to start the ball rolling. The first dish impressed: the Prawn Fritters of whole prawns and salted egg yolk were expertly deep-fried and delightful.

The Crisp Bay Squid was just as good;  crunchy and tastily caramelised with just the right degree of sweetness. 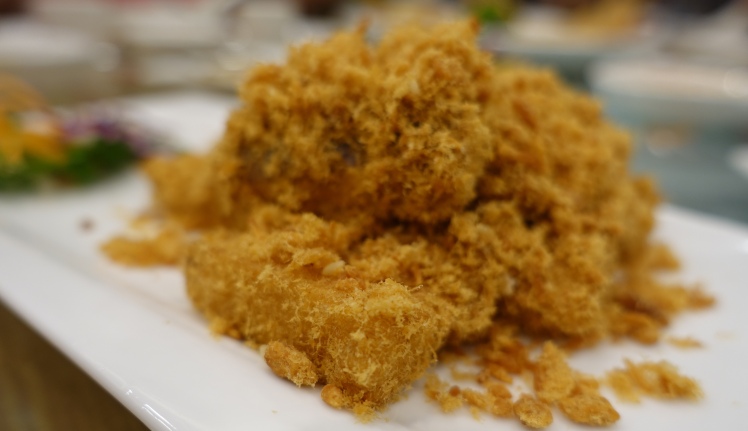 The deep-fried Pork Floss Eggplant was delicious too, with the eggplant still moist, and perfect with the savoury floss.

The Fish Skin sautéed with salted egg yolk paste was so irresistible that they disappeared in a flurry.

The Salt-Pepper White Bait didn’t fare as well; it was mildly over-fried and a tad too salty, although the garlic crisps were addictive.

The take on the Sambal Clams were mixed – the spicy sauce was robust and perfect with the rice but the clams were a little too tiny, with not much flesh to them.

The classic Cantonese Black-sauce Prawn came with  well-sized fresh prawns in a sweet dark soy-sauce. The best parts were the crispy shells and the heads, yummy when paired with the plain rice.

Another of Joyden’s deserving signature dish is the Mandarin Peel Pork Ribs. The well-marinated ribs are slow-cooked to the point that the meat just falls off easily from the bone, and is mouth-watering with the sticky and tangy peel-flavoured sauce; best eaten with rice. 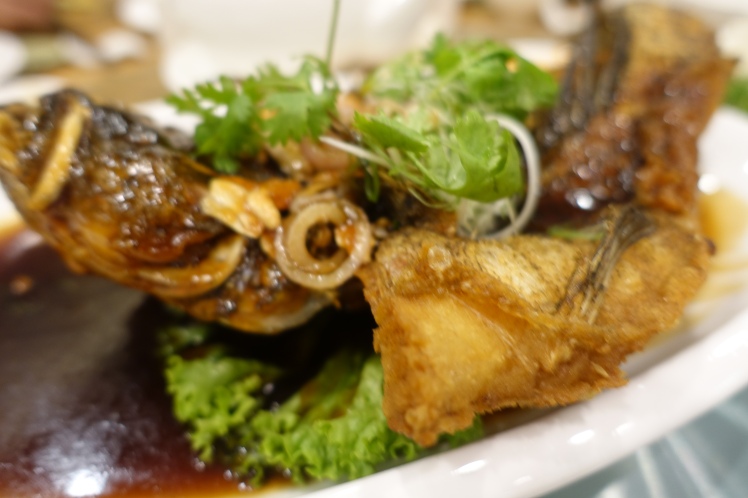 The oil-fried Soon Hock marble goby was crispy, yet yielding chunks of fresh and succulent meat in a thick soy-sauce reduction, delectable but just a tad salty.

Being a tofu fan, I found the handcrafted Seafood Tofu Balls luscious; they were packed with fresh minced seafood and fried to a fluffy golden crisp – so yummy eaten as it.

The Spinach poached in a superior broth was a refreshing change to the heavy food, and prepared us for the grand finale. 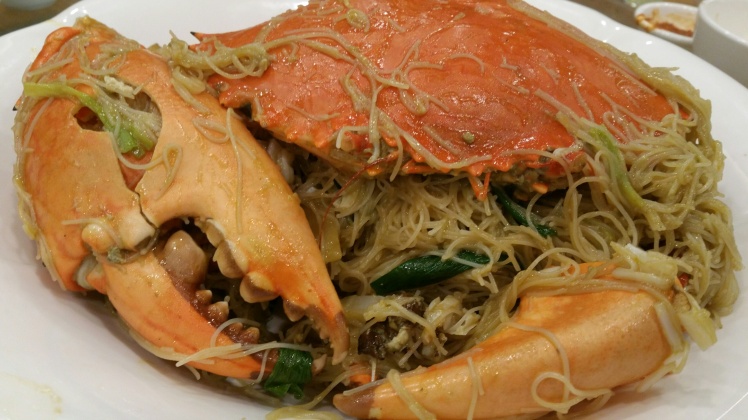 We ended the meal with the  Braised Crab Vermicelli. The 1.6kg crab was fresh and meaty, and the vermicelli was nicely soaked with flavours of the seafood broth. It would have been perfect if not for the fact that the dish was again a tad salty.

While Joyden Treasures has not persuaded me to abandon my old faithfuls Cantonese restaurants, I would still recommend a visit; the food is good, but would have been excellent if the chefs had lighten their hands with the salt. The cuisine is very Malaysian-Cantonese style where the cooking leans towards the robust end, with hearty fare intended to be paired with rice for a shared family meal. Service was very good too, and the open space carpark in front of the still-quiet complex has more than ample lots.

We headed to my home to finish the evening with crushed-peanut dumpling in a gula-melaka and sweet potato soup flavoured with Pandan leaves. According to Chinese folklore, you are a year older with the passing of the Dongzhi; just glad that we ended the “year” with a very bountiful harvest.